This is my 100th article and it was celebrated. 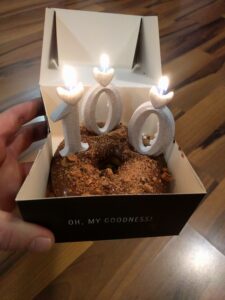 As I’m a fan of polymorphism, I play with different approaches on this subject. I want to find new ways of dealing with polymorphic objects under constrained scenarios. Not all of them are great, but every time I learn something new that I should or should not apply in real situations.

This time, the self-imposed context is:

I want a list of objects where each object behaves differently.

But I cannot simply add a method to Object because I want a different method attached to each Object from the array. I was spinning around attaching lambdas to those objects for a while when it hit me: I could use another object to wrap my original one.

The wrapper knows about Object (T) and its corresponding lambda (Function)

and it’s callable for simple use.

I use a lambda function with its first parameter being the original object (Object), the equivalent of this (think of self in Python). And any other parameters.

When I call the object’s “behavior”, I pass all the arguments except “this”.

How does it happen?

What’s wrong with this approach?

There are two possible deal-breakers depending on your context:

And that’s it with my learning purpose experiment. Here’s the full source code: END_OF_DOCUMENT_TOKEN_TO_BE_REPLACED